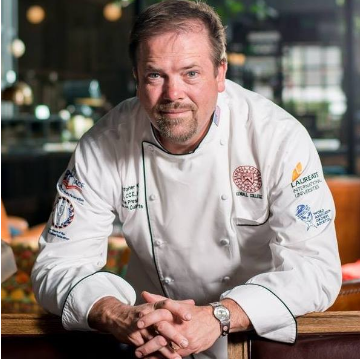 Christopher Koetke has worked in the culinary arts for well over three decades. Over the last 20 years, he has devoted his professional life to culinary education at Kendall College and at 48 campuses in 12 countries. Before his work in culinary education, he worked in some of the finest restaurants and patisseries in the USA, France and Switzerland, which culminated as chef of one of Chicago’s top restaurants.

Chris has been honored with the Outstanding Alumni from the Brennan School of Business at Dominican University. He has also been awarded the Alumni Achievement Award from Valparaiso University and received the WORLDCHEFS Educator Award.

Chris hosted his own national television cooking show in the USA for almost five years and has authored a well-known culinary textbook. He is also an expert on culinary sustainability.

Whether you’re taking your first steps towards a new career in culinary arts or expanding your knowledge on sustainable cooking methods, you are moving in the right direction! Get started by signing up through your social media account, or by registering with your email address.