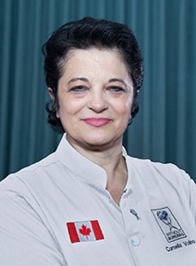 Cornelia Volino is Chief Advisor of WORLDCHEFS Academy and Project Manager for the development of the Pre-Commis Chef Course, mobile app, and website. She is also WORLDCHEFS Secretary General, Past President of the Canadian Culinary Federation, and Member of the Toronto Branch. Over the past 35 years, Cornelia has provided volunteer work to support the culinary profession and related trade associations in Canada and around the world. Through the collective efforts of World Chefs Without Borders, Cornelia strives to help those affected by natural disasters and encourage aid relief. As a WORLDCHEFS Certified A Judge in Vegan/Plant-Based, Hot Kitchen & Culinary Arts, she also shares her insight and knowledge at international culinary competitions. Cornelia is the Lead Instructor of the WORLDCHEFS Vegan/Plant-Based Competition Seminar and Leader of the CCC Vegan/Plant-Based Sub-Committee.

Take your first steps towards a new career in culinary arts. Get started by signing up through your social media account, or by registering with your email address.